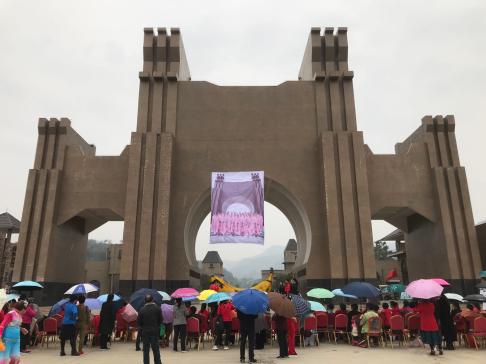 Austrian artist Anny Wass uses sequence photography to re-enact the movements of labourers observed during her residency at the Jigongshan Museum in Henan province, central China.

The Series – Me, Myself and I

Dormant and subservient, the visual language of the series reflects the evolution of the work itself.
The robotic, repetitive acts in Wass’s photographs mimic an orchestrated and purportedly harmonious culture under China’s communist rule, the enclosed museum space evoking a state censorship apparatus that shields citizens from outside voices.

Wass had planned to adapt her 2016 interactive performance piece Piñata, in recognition of the Mexican cultural icon’s Chinese origins, but was refused permission to encourage participants to beat and smash the papier-mâché / paper decoration – which the museum feared the authorities would consider subversive. Paper crafts are also treated with respect in China, being associated with offerings for the dead.

This site uses Akismet to reduce spam. Learn how your comment data is processed.

Find us on IG

Hong Kong / Tonight - Opening party for “Disjointed” by VMSCH @chez.trente
A Drastic Social Community Event
Annika @annikafizzer is from South Africa, she loves making MUSIC, be with PEOPLE and do YOGA (she is an avid yoga practitioner).